About Turkey and Antalya 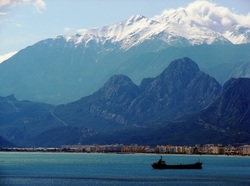 Antalya is a port city on the south-west coast of Turkey. Surrounded by the beautiful shores of the Mediterranean and the Taurus Mountains, it's landscape is both breathtaking and unique. With over 1 million people, it is the fastest growing city in the country.

Almost twenty centuries have passed since Paul, Barnabas, and John Mark first landed in South-Western Turkey. The three of them played a crucial role in the growth of the first-century Gentile church in the Mediterranean world. Paul and Barnabas proceeded to make the long trek to Pisidian Antioch and beyond. As a result of their efforts, the church erupted. For 1000 years, Turkey was the bastion of Christianity.

Beginning around 1300AD, for six centuries, the Ottoman Empire ruled Turkey, and it became the chief protagonist and propagator of Islam. Since the empire’s demise, Turkey has officially been declared a secular state, but Islam still remains the overwhelming majority.

Few of the 70 million Muslims in Turkey have ever heard the Gospel. There are only about 3 thousand known evangelical Christians (less than 0.1%). Operation World states that Turkey remains the largest un-reached nation in the world.