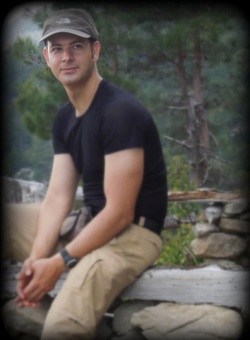 Kerem Koç is the pastor of Antalya Protestant Church and we have been friends for 7 years.  Because of our friendship I began to come to the church and met with Carl & Amy there. They are an American missionary couple. I was an Atheist and had no God. Therefore I was not looking for God to change my life nor to improve my behaviors. But there were people in my life, many different people.  I began to watch the people who were in the church. I began to compare them with the other people I knew.  One thing that really affected me were the good marriage examples that I was seeing because I had never seen a good one before.  Even my parents' marriage had some serious problems in the past.  But Kerem & Buse and Carl & Amy had very good relations. Even their children were different. I know the Turkish culture very well so began to compare their relations with the other relations. There were big differences.

In the beginning I couldn't understand the reason and it was just interesting for me. But I was wondering the reason. Not just their relations but their attitudes were different as well. They were always smiling; there was a kind of light on their faces. I see only darkness on most religious Muslim faces. But the Christians had no darkness; on the contrary they had light on their faces. They were honest, religious and good. They were different from the other people and they had fascinated me with their attitudes, words, relations... They were so consistent.  And I began to understand the reason of the differences because Jesus had changed their lives and they were trying to obey His commands and follow His path. If they were hypocrites I'm sure that it would affect me negatively and I wouldn't approach to the Christians with sympathy.

Lying is very normal in our culture.  Our culture even encourages people to lie and to be hypocritical.   I have never before seen honest people. The Koç’s and Kaiser’s testimonies were crucially important for me because they were concrete and real. It helped me to understand how important our behaviors and attitudes were because they affect other people. Mostly we don't realize it but the non-Christian people are watching us. They are evaluating all of our words, behaviors... Therefore I understood we should be very moderate and careful with our words and behaviors.

I put my faith in Jesus on 21st January 2011 and Kerem and Carl helped me in that. My life began to change after that day.  This change could also be seen in my relationships. I was determined to not marry because I had never seen a good marriage before.  And I had no hope that marriage would be different for me.  When I felt that I was starting to get close to someone I would run away. Marriage was a real nightmare for me.  Now I have a relation with a Christian woman and for the first time in my life I have no fear nor anxiety in this relationship and for marriage. And I want to marry, not to run away this time.